Big Mickey was the biggest crane at the Steel Company yard.

Big Mickey loaded steel for the Z-Stacks and the Star Fleet when they were completing for the steel contact.

Later, he loads the naval tramper Kraka-Toa with explosives from the Z-Stacks. When Bluenose arrived and asserted that his load was before Zorran's, Big Mickey was still in the process of unloading Zorran's barge, which would have been dangerous to move. Bluenose bellowed orders at Big Mickey to give priority to him and forced his way into Zorran's unsafe barge, causing a massive harbour fire. While the tugs are able to get clear, Big Mickey's dock goes up in flames, collapses and the big crane was lost in the water.

Big Mickey was known to be supportive towards the Star Fleet, as he rooted for them in their competition against the Z-Stacks for the steel contract and according to Zorran, he was clearly his own boss as he noted that "Nobody tells Big Mickey what to do!"

After the show's production ended, Big Mickey was recycled as a background prop for Brendam Docks in Thomas & Friends. His most notable role was in Edward's Brass Band, where he accidentally knocked Edward off the track while unloading a boiler from a ship, though he wasn't referred to by name.

Like the other former TUGS characters and props, Big Mickey was also carried over to the new CGI series.

In New Crane on the Dock from the 21st season of Thomas & Friends, Big Mickey gained a face and the ability to speak again. Upon speaking up towards the end of the episode, he was thrown off by everyone staring at him due to the fact that no one on Sodor had ever heard him talk before.

Big Mickey is based on a 350-ton Hammerhead crane. He most strongly resembles the US Navy's League Island Crane built in 1919 by the McMyler-Interstate Company for the Philadelphia Naval Shipyard. Weighing 3,500 tons, it was the world's largest crane at the time. 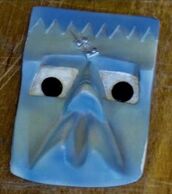 Unused 'Ghost' Face from a deleted scene from Ghosts

Big Mickey with a face in Season 21 of Thomas & Friends. 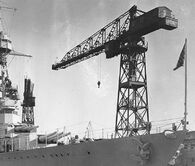 Big Mickey's possible basis
Add a photo to this gallery

Retrieved from "https://tugs.fandom.com/wiki/Big_Mickey?oldid=51209"
Community content is available under CC-BY-SA unless otherwise noted.