David Mitton first began his career in 1965, as a special effects technician for Gerry Anderson's Supermarionation shows such as Thunderbirds, Captain Scarlet and the Mysterons and Joe 90. He became friends with Robert D. Cardona, and they established their own company called Clearwater Features.

In 1983, Mitton began his work as writer and producer on the series, Thomas the Tank Engine & Friends alongside Cardona and was the director of the show. After two seasons of the show, Mitton and Cardona decided to create their own show and the evental concept by 1988 came to be Tugs. David Mitton wrote six and directed nine episodes of the series.

By the end of 1990, Tugs was cancelled and Clearwater Features closed down. David Mitton continued directing Thomas The Tank Engine & Friends (after the show was renewed) until his retirement in 2003.

In 2007, he and producer David Lane launched a company of their own called Pineapple Squared Entertainment Ltd, and were working on a new show called Adventures on Orsum Island, which was a hybrid series using live-action sets mixed with CGI elements.

David Mitton died of a heart attack on 28th May 2008, at the age of 69. Many Thomas and TUGS fans were greatly saddened by this news. Production on Adventures on Orsum Island ceased and the show was later cancelled. Only a handful of clips, including a rough cut of the first episode, still exists.

Britt and David give Wilbert Awdry a look at Thomas' first shooting. 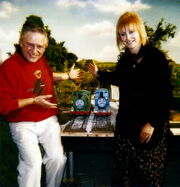 David Mitton with Britt Allcroft working on Season 4 of Thomas
Add a photo to this gallery
Retrieved from "https://tugs.fandom.com/wiki/David_Mitton?oldid=49885"
Community content is available under CC-BY-SA unless otherwise noted.