Fishing boats are small vessels that collect fish. Many of these work in Bigg City Port and upriver.

Two of these watched the Star Fleet bring in the Duchess. One was also in the Regatta Parade.

The Shrimpers are also a type of fishing boat. However, they catch shrimps instead.

After TUGS' production ended, a model of a fishing boat was sold to Britt Allcroft, the creator of the Thomas & Friends television series. The model appeared in Thomas & Friends onset during series 3-5 and was used as a mail boat. 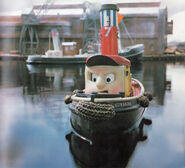 Add a photo to this gallery

A fishing boat in Thomas & Friends
Add a photo to this gallery
Retrieved from "https://tugs.fandom.com/wiki/Fishing_Boats?oldid=50581"
Community content is available under CC-BY-SA unless otherwise noted.