Frank and Eddie are a pair of twin railway barges (also known as car floats) who work with Top Hat, and are used for the transportation of railway rolling stock across the port. They are very quick-witted and are among the few that can deal with Top Hat's self-proclaimed superiority. Both of the twins speak with a Cockney accent.

Frank and Eddie are painted faded brown. Their names are painted on black nameplates in white underneath their faces. 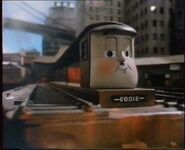 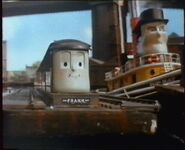 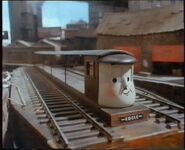 Takara Frank
Add a photo to this gallery
Dock Railway
Retrieved from "https://tugs.fandom.com/wiki/Frank_and_Eddie?oldid=50671"
Community content is available under CC-BY-SA unless otherwise noted.