The Goods Engine is a black tank engine who works on the Dock Railway in Bigg City Port.

In the episode High Tide, the steel rig holding up the bridge collapsed along with the bridge soon after, just as the goods engine was making its way towards it. Lord Stinker had an idea, which was to attempt to catch the train by waiting in front of the broken rail. His idea worked and no serious damage was caused to the goods engine or its wagons.

The goods engine superficially resembles a US Army 0-6-0T tank engine and EJ Lavino and Company 34, which is also an 0-6-0T. However, its model is made from "splicing" together various parts from other locomotives (such as the cab and the front, which upon close inspection, is a German design in origin) and scratch-building a few parts (most notably, the side tanks). Jeremy King said that the model was disliked by David Mitton, likely because of its low realism.

The goods engine's principal components come from a DRG class 80, with the cab coming from a DHG 500 the former of which is the same class as Puffa. 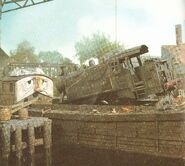 The good's engine's basis
Add a photo to this gallery
Dock Railway
Retrieved from "https://tugs.fandom.com/wiki/Goods_Engine?oldid=50762"
Community content is available under CC-BY-SA unless otherwise noted.