Jack is a grapple crane, owned by the Municipal Garbage Corporation.

On the day of the Regatta, Warrior had had taken Lord Stinker to the City Dump. When they arrive, Jack tells Warrior that there is not any garbage today, so too does the garbage master. After they convince Warrior about "no garbage", the garbage master explains that they are going to make Lord Stinker, their float for the regatta, look smart using prime colourful garbage.

When the S.S. Vienna came to visit Bigg City Port, Warrior had to find an empty barge as she would have garbage to unload. However, he was having difficulties finding an empty barge and Lord Stinker was full. All the barges which were full could not be emptied because Jack had a cold. A large board was placed next to him reading 'OUT OF ORDER'.

Besides the City Dump, Jack has also worked at the coal yard. 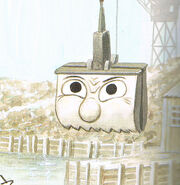 Add a photo to this gallery
Retrieved from "https://tugs.fandom.com/wiki/Jack?oldid=50289"
Community content is available under CC-BY-SA unless otherwise noted.