"I'll break your stack for this one! THEY CAN'T HOLD JOHNNY CUBA!!!"
— Johnny Cuba, High Winds

Johnny Cuba is a notorious and violent tramp steamer gangster. His strong accent indicates that he is from Australia. He only appears in High Winds.

Long ago, Johnny Cuba was a good friend to Captain Zero, that is, until something happened that ruined their friendship and Captain Zero had since forbidden his tugs from ever having anything to do with him again.

Johnny had arrived in Bigg City Port to make plans with fellow criminal friends during a period of strong and troublesome tempest weather. He threatened Zebedee and manipulated him into helping him into the port unnoticed.

Johnny sent Zebedee on an errand to steal a barge of coal for him, and threatened to sink him if he landed either of them in trouble. Due to Johnny and Captain Zero's feud that occurred in the past, Zebedee was placed in an awkward and dangerous situation, until Hercules discovered Johnny's hideout in an abandoned dock. He attempted to escape, but Zebedee stuck up courage to ram him against the quayside and then take him to the authorities. Despite Johnny shouting out a claim, "THEY CAN'T HOLD JOHNNY CUBA!!!" they did.

He later appears in one of the stories of the TUGS 1989 Annual, The Missing Barge, waiting for goods in the estuary, but Sunshine gives the crates to the Customs Launch. While Sunshine receives praise, the tanker that contained his goods was arrested. It was also in the story that Captain Star had warned Sunshine about Johnny Cuba before, hinting that even Captain Star is aware of the tramper's notorious and criminal behavior.

Despite his notorious persona in the TV series, in the Buzz Book, Nothing to Declare, it was shown that Johnny Cuba had a good and patriotic streak in him as he stopped a submarine from foiling Bluenose's inspection and the arrival of the top secret navy vessels.

Johnny's whistle is very low pitched and has a distant whooping noise. Also, it's Warrior's at a lower pitch. 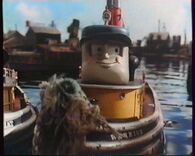 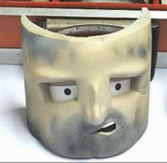 Johnny Cuba's possible basis
Add a photo to this gallery
Retrieved from "https://tugs.fandom.com/wiki/Johnny_Cuba?oldid=50553"
Community content is available under CC-BY-SA unless otherwise noted.