"No! I'll get smashed to bits instead!"
— Little Ditcher to Warrior, High Tide

Little Ditcher is a small and dirty a-frame crane, and is therefore one of the smallest floating cranes in the port. He is sometimes used for dredging up river at Mittsville or for oyster fishing in the estuary, as well as various other jobs in the harbour. His size makes him unsuitable for rescue operations. He is good friends with the Star Tugs. 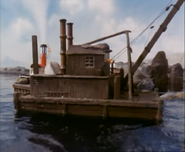 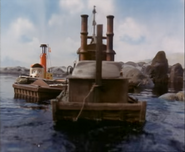 Add a photo to this gallery
Retrieved from "https://tugs.fandom.com/wiki/Little_Ditcher?oldid=50288"
Community content is available under CC-BY-SA unless otherwise noted.