Sally Seaplane is a plane that can land on both water and land, and is a friend of the Star Fleet, who have the contract to provide her with fuel. Sunshine appears to have a slight crush on her.

She appears only briefly in a selected number of episodes and speaks only in the first episode of Tugs, Sunshine.

Sally's technical definition is a 'flying boat' because her main source of buoyancy, like a ship, comes from her hull/fuselage with small floats on each wing to stabilise her, unlike the other form of seaplane - the 'floatplane' which uses a normal aircraft fuselage with large floats slung underneath to support it on water. If we expand on this she can be termed an 'Amphibious Flying Boat' because she has fold-up landing gear on her fuselage, allowing her to land on runways as well as water.

Her home is the Seaplane Hangar, which is right next to Lucky's Yard.

Sally's tail-number is S-ALLY, a fictional sequence that would not be assigned to a real plane - any civil aircraft registered in the United States has a tail-number beginning with the letter "N". Her basis, however, is actually a British design - namely the Saro A.19 "Cloud" seaplane. This creates a continuity error, because the "Clouds" first took flight in 1930, years after her first appearance in Sunshine, which takes place in the 1920s.

Sally is painted grey with her name painted on her tail in black. 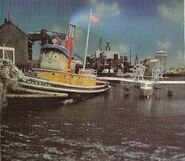 Sally's Appearance in a Deleted Scene of High Winds

Sally in a Deleted Scene from Regatta

Sunshine and Sally in Jinxed

Add a photo to this gallery
Retrieved from "https://tugs.fandom.com/wiki/Sally_Seaplane?oldid=50281"
Community content is available under CC-BY-SA unless otherwise noted.