Sea Rogue's Uncle is an old harbour tug from upriver who also happens to be the Uncle of Sea Rogue. His real name, if he has one, is currently unknown. However, he was nicknamed "Old Man" by Sea Rogue and referred to as "The Old Tug" by Captain Star.

Sea Rogue's Uncle was once trapped in an old warehouse by some Pirates who made his nephew, Sea Rogue, steal barges for them in order to set him free. Otherwise, they would sink him.

One night, Sea Rogue was found by Grampus, Ten Cents, and Sunshine. After some explaining, they devised a plan to capture the Pirates. Meanwhile, Zip and Zug found the Old Warehouse where Sea Rogue's uncle and the Stolen Barges were being held, but were soon chased out by the Pirate Tugs. Once the Pirates left the Warehouse, Grampus went to rescue Sea Rogue’s Uncle.

When everything had settled, Sea Rogue and his Uncle left for upriver the Following Morning.

Sea Rogue's Uncle is an elderly tug who both cares for, and often jokes around with his nephew. He's a kind tug who knows the differences between right or wrong, as depicted by his pleading for Sea Rogue not to steal barges while being held for ransom.

His livery consists of a black hull sporting a white top, a light orange superstructure with white trim, and a red smokestack. The starboard side of his superstructure is boarded up.

His model turned into Boomer 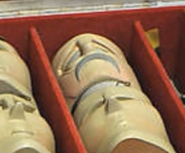 His face mask on Boomer

His possible basis
Add a photo to this gallery
Retrieved from "https://tugs.fandom.com/wiki/Sea_Rogue%27s_Uncle?oldid=50456"
Community content is available under CC-BY-SA unless otherwise noted.