View source
watch 01:36
We're Getting Mutants in the MCU - The Loop
Do you like this video?
Play Sound

"They were a good crew, striving to be the best in the port. Not always succeeding, but proud of their work."
— Captain Star describing his fleet, Sunshine

Star Tug and Marine (affectionately known as the Star Fleet or the Star Tugs) are one of two tugboat fleets that work in Bigg City Port. They are based off the tugs of the San Francisco waters from the 1920s.

Throughout the series, the Star Fleet's main rivals are Captain Zero's Z-Stacks. The Star Fleet were commended for being a good crew to Captain Star, attempting to be the best in Bigg City, not always succeeding but proud of their work.

The Star Fleet consists of a variety of tugs. That being two switchers, two harbour tugs, one paddle wheeled harbour tug, one railway tug and one ocean going tug. The Star Tugs and their friendly and brave personalities are meant to represent a bright side of harbour life in the 1920s while the Z-Stacks represent the dark side.

Sunshine and Grampus joined the Star Fleet during the series. A tug named Boomer, who was found drifting out at sea by Ten Cents and Sunshine, was also given a trial. However, after a series of bad luck on every job Boomer took, Captain Star sent him to Lucky's Yard with strict instructions for them to make him anything, except a tug again. Lucky's Yard rebuilt Boomer into a house boat.

The Star Fleet is based on the Crowley Maritime fleet, a company founded in San Francisco in 1892. It is also named after the last ever fleet of commercial sailing scows on the West Coast of North America, operated by the manufacturer Alaska Packers' Association. 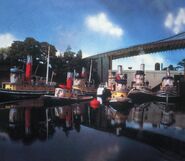 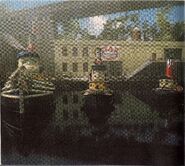